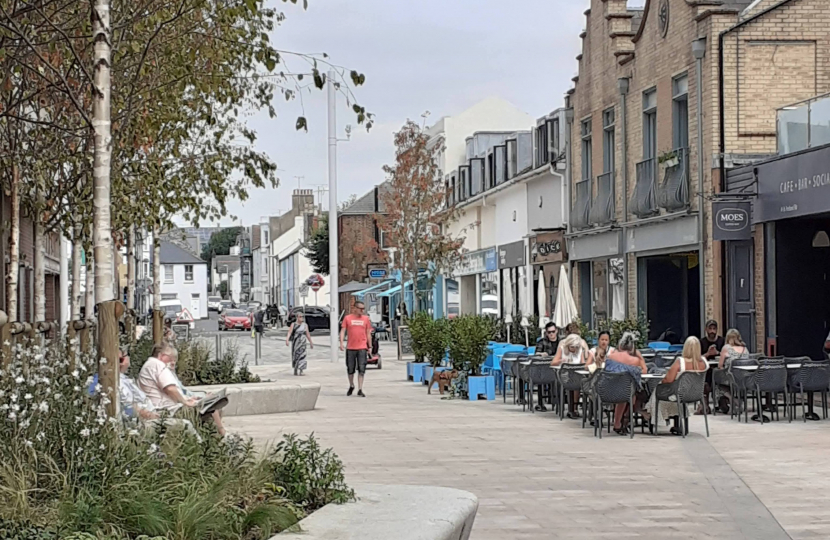 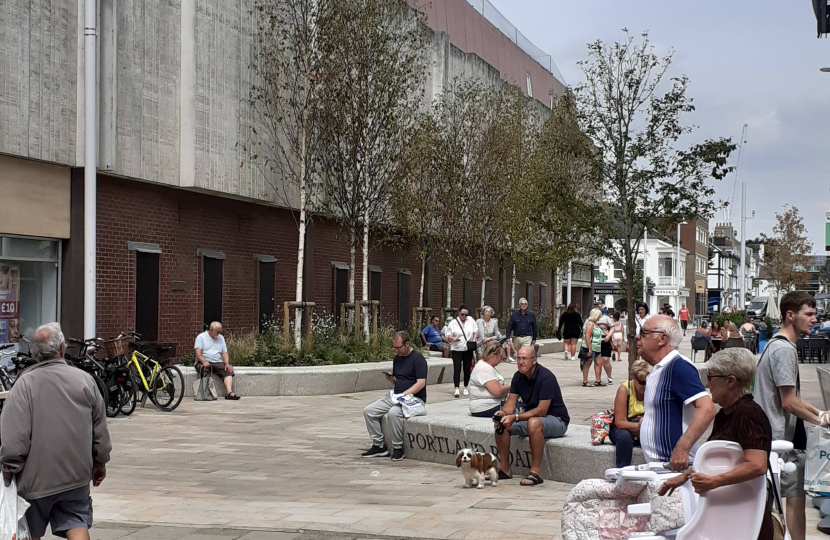 Worthing Conservative councillors are welcoming the official opening of the Portland Road public realm improvement works by the Mayor of Worthing this week. The scheme which is part of a £5M growth deal partnership between Worthing Borough Council and West Sussex County Council is the first of a number of stages of planned improvements to the town centre public realm over the next few years.

The work, carried out with the support of local traders and the Town Centre Initiative, has seen the street scene in Portland Road completely transformed, with the introduction of new paving, seating and the semi- pedestrianisation of the road between 10am and 10pm. A green wall of trees has been introduced along the previously blank wall of Boots.

The Portland Road scheme has been led by officers from Worthing Borough Council and is seen as a model as to how the Borough Council and County Council can work together in partnership to ensure improvements in the town centre are delivered on-time and to budget.

Cllr Kevin Jenkins, leader of the Worthing Conservative group said; 'This scheme was started in the planning stages some 4 years ago after a public consultation that identified the type of improvements people would like to see in the town and that Portland Road was a well trodden route into town centre. The quality of work and materials were carefully planned to ensure that the finished product would provide a lasting benefit and act as an exemplar for the future works planned for Montague Place and the rest of the town centre.'

As part of the deal with WSCC, Worthing councillors pledged to use circa £3M of developer contributions to the Community Infrastructure Levy, secured from town centre development sites, to help fund the next stage in Montague Place.

Cllr Jenkins said 'Despite the regular criticism and false claims we faced from Labour, Councillors Deen and McCabe, over costs, we are really pleased to see this work come to fruition, talking to businesses and users of the street, the feedback about the finished work has been very positive and we now look to the Labour administration to continue this work as previously pledged with WSCC across the rest of the town centre.'

Josh Harris Central Ward Campaigner and Co-Media Officer For Worthing West Conservatives said. " I'm glad to finally see Portland road's renovation scheme finished". I remember going to see how the work was progressing with Cllr Kevin Jenkins back in April whilst on the local Election Campaign. I would also like to say its good to see investment coming into Worthing. I would also like to thank 2 ex County Councillors Michael Cloake and Paul High for securing the funding from West Sussex County Council. 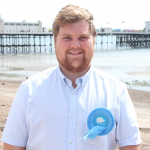 Public Session with Affected Members of the Local Community:

The situation with unauthorised caravanning and the illegal activities of members of the traveller community continues.

The disturbance to local members of the public has never felt so severely.